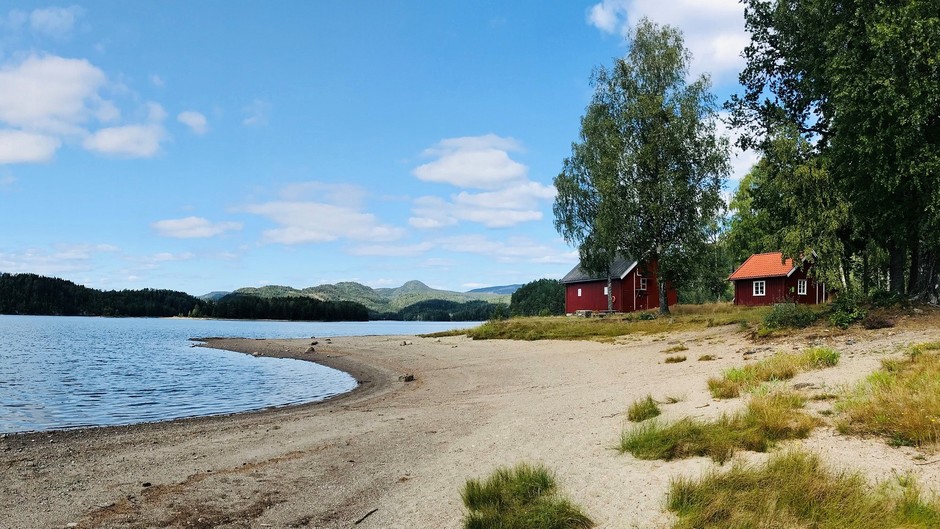 Finds of settlements along the Siljan water system suggests human activity here for the last 10 000 years.

Near Austad and Holte, there have been finds of stone axes from the Early Stone Age, and twelve axes from Holte-Kvisla suggest that there has been a stable winter settlement here since the Bronze Age. Pollen analysis shows that the raising of livestock began here about 1800 years B.C. By Torsholt, signs of grain growing have been found from ca. 440 years B.C., and the best soils appear to have been in use since around the year 0.  Stone burial mounds from the Iron Age at Siljuhaugen and the discovery of a primitive, hollowed-out log boat from Lauv, are clear signs of a growing local community.  The growth continued into the Middle Ages, but after the Black Death Plague struck, the local community lost its organizational power and fell in under the community of Eidanger’s rule.

The export of timber increased during the 1500s, but royal sawmill-privileges  took over in the 1600s. The outlying areas became essentially worthless locally, and the forest got sold cheaply to the companies Larvik Grevskap and Løvenskiold-Fossum, which then took control over the waterways, forest and people. The tenant farmers and smallholders in the valley lived from the services they carried out for the Moholt Iron Works, including lumbering, burning and transporting of charcoal, and a variety of handicrafts.  Around the First World War, the time of the tenant farmer drew to an end, and people were forced to buy or rent their farms. Many farms disappeared completely.

The logging run between Gorningen and Laksjø stands as a monument to a log-floating history that spanned from 1736 to 1969. The huge volume of timber that was floated from Siljan and Mykle made the waterway into a backbone for Fritzøegodset, an industrial estate that utilized this prosperous forestry area around the river. Around 1910, Siljan had one of the strongest forestry venues in the country. The organization of labour in the small towns at this time was important for the establishment of Norway as a national community. The recipe for balancing both pay struggles against, and cooperation with, one’s employer was founded in this small but proud lumber town. The Slemsdal strike in 1910 was the first of its kind in the country. This challenged old ways of thinking and became a nationally recognized symbol.